Trudy Wohlleben just send a group of scientists in Denmark, England, Canada, and the US the latest RADARSAT image of the ice island that formed in Petermann Glacier earlier this week. 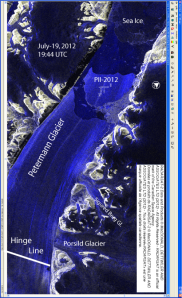 RadarSat Image of Petermann Ice Island (PII-2012) and Glacier kindly provided by Trudy Wohlleben, Canadian Ice Service. The location of the hinge line is approximate only.

The current position of the remaining ice shelf of Petermann Glacier is the farthest landward since recorded observations. Dr. Croppinger was the first to provide a map of the glacier in a report submitted to the British Parliament in 1877. Below I show this first and subsequent mapping of Petermann Glacier (Falkner et al., 2011):

Earlier, I alluded to the hinge line where the ice sheet meets both ocean and bed rock. At this place, the ice is about 600-700 meters thick and the bed rock is about 600 m below sea level. The ice thickness changes rapidly within 10-20 kilometers from the hinge line to perhaps 100-150 meters. Hence the floating part of the glacier has a cavity, like that of Pine Island Glacier in Antarctica, which is largely created by ocean melting, but I am getting ahead of myself, lets first look at the geometry in a slice along the glacier with land on the right and the ocean to the left: 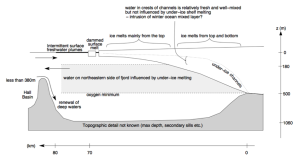 Schematic illustrating the geometry and distribution of waters with different temperatures and salinities in Petermann Fjord. Adapted from Johnson et al. (2011)

Note, that this is a sketch, we are not entirely sure how deep the sill is and we are not entirely sure how the ice thickness changes across the fjord. Lets ignore these details even though the may become important if one needs to consider balances of mass and forces. We used this sketch to conceptualize what and where the ocean may melt the glacier from below. All of this was published last year as Johnson et al. (2011), but we actually submitted it before the 2010 calving event. Peer-review takes time and the current rapid changes all around Greenland often over-take this slow process by creating new situations on the ground such as the 2010 and 2012 calving events, but this is not the point I try to make.

The point that I like to make is this section of temperature and salinity that we collected in 2009 aboard the Canadian Coast Guard Ship Henry Larsen when we last visited Nares Strait and Petermann Fjord. We will return in 2 weeks to recover the data and instruments which we deployed 3 years ago. So, all of this is as up to date as it gets:

Ocean temperature (left) and salinity (right) as each varies with depth (vertical) and distance across the fjord. The view is up into the fjord towards land. Note that warmest water (dark red) are below 250-m depth where the waters contain more salt than elsewhere. Adapted from Johnson et al. (2011)

It perhaps surprises, that the warmest waters in Petermann Fjord are found 200-300 meters below the surface. Warm water rises to the surface, right? Wrong, it only does so, when it is lighter, but the warm water at depth is actually very heavy on account of the salt it contains. The distribution of temperature and salinity is typical for the entire Arctic Ocean and there are no real surprises here. Also note that the surface waters down to 100 meters or so are very cold and contain less salt. This is the Arctic or Polar water near the freezing point that is cooled by the air and the sea ice it may melt. The warmer waters at depth originate from the Atlantic they are little affected by local air temperature or ice. I do not want to talk about too much, but if you really want, have a look at Muenchow et al. (2011) where I discuss the change observed in these deeper waters.

Now lets put together the ocean temperature data from the 2009 Petermann sections with the sketch of the floating part of Petermann Glacier. The heat from the Atlantic Ocean is exactly at the place where the most ocean melting takes place. If more Atlantic water enters the fjord more often (recall, some of it may have to “climb” over the sill of unknown depth to enter from adjacent Nares Strait), then it is likely, that more melting takes place. Furthermore, with the removal of this much ice-shelf that was previously attached to the vertical side walls of the fjord a stable and steady force balance of the glacier may have been disturbed. Thus, the glacier may go through a transition at the same time that air temperatures, ocean temperatures, ocean salinities, and Arctic ice cover all also go through their own transition.

All transitions are stressful as it is not always clear where the new equilibrium will be. Petermann Glacier may grow, perhaps temporarily at a faster rate, back to where it was over the next 20-40 years, or it may be stressed so much that its hinge line starts migrating. I do not know enough about the physics at the hinge line to say which way it will go. Pine Island Glacier’s hinge line moved landward downslope into a depression, accelerated landward movement dramatically, drews down much of the ice sheet behind it, and thus contributed substantially to global sea level rise. In order to model and predict these processes, we need to understand the detailed physics so that we can use numerical approximations of mathematical equations that are complex and nonlinear. We need a new generation of physical scientists to solve these puzzles, if we care to know how global warming may (or may not) impact all the change we all observe. And who knows, we may even discover something we did not anticipate …

7 responses to “Oceanography of Petermann Fjord and Glacier Melting”