Record Warming and Melting of Greenland

These are admittedly daily data, and yes, it is warm in summer everywhere, and yes, when it is warm, snow and ice melt at the surface. Here is the latest image of Greenland’s warming and melting that I lifted (figure and caption) straight from today’s NASA release: 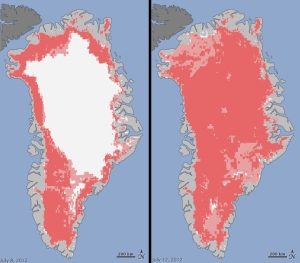 Extent of surface melt over Greenland’s ice sheet on July 8, 2012 (left) and July 12, 2012 (right). Measurements from three satellites showed that on July 8, about 40 percent of the ice sheet had undergone thawing at or near the surface. In just a few days, the melting had dramatically accelerated and an estimated 97 percent of the ice sheet surface had thawed by July 12. In the image, the areas classified as “probable melt” (light pink) correspond to those sites where at least one satellite detected surface melting. The areas classified as “melt” (dark pink) correspond to sites where two or three satellites detected surface melting. Image credit: Jesse Allen, NASA Earth Observatory and Nicolo E. DiGirolamo, SSAI and Cryospheric Sciences Laboratory

The drama comes in, when we are told, that Greenland’s ice core records from the last 250 years suggest that such high temperature and such wide-spread melting is an event that only happens once every 150 years or so, e.g, Lora Koenig is quoted as

“Ice cores from Summit show that melting events of this type occur about once every 150 years on average. With the last one happening in 1889, this event is right on time,” said Lora Koenig, a Goddard glaciologist and a member of the research team analyzing the satellite data. “But if we continue to observe melting events like this in upcoming years, it will be worrisome.”

We are talking a time as far back as the American Civil War, the early stages of the industrial revolution, a time when people marooned in Nares Straits starved to death because a supply ship could not reach them (Greeley’s First International Polar Year Expedition). There are cycles to all things, sure, but mathematics tells us that almost all functions (even a discontinuous step function) can be described as the sum of a large number of cycles with differing amplitudes and phases … as demonstrated by Fourier that one can read about and play with.

UPDATE 7-25: Terry Moran found ice core data and publication of Alley and Anandakrishnan (1995) that places this month’s melt into the 10,000 year context:

Melt against age (upper panel) and July insolation against age (lower panel) for the GISP2 site. Years containing melt features are shown by thin dotted lines. The heavier textured line is the 100-a running mean of melt frequency (number of melt features per 100 years), and the heavy black line is the 1000-a running mean. The lower panel shows deviation of July insolation from modern values in calories/cm2/day, from Berger (1978; 1979); positive values indicate more insolation than today.

Basically this graph says that, averaged over the last 4000 or so, the snow melts once every 250 years at the GISP2 site. The graph also shows, that the incoming sun light (solar insulation) in July has actually decreased from 4000 years ago to today (Berger, 1979)./UPDATE

EDIT-2: Some of the current Summit, Greenland field work is conducted by PhD students and is described at Dartmouth IGERT, where IGERT stands for Integrative Graduation Education and Research Traineeship, an innovative program funded by the National Science Foundation.

Edit/Hedge: … these are daily images and all daily data that contain climate and weather and noise are always hard to interpret. The color red evokes emotions, too, but what does it represent? What are the units of the colors? How is melt defined? How does this “variable” vary as a function of time, say over 1 or 10 or 20 years? This is all very, very preliminary and, at least for me, impossible to check thoroughly.

This entry was posted in Global Warming and tagged climate change, Greenland, weather. Bookmark the permalink.

10 responses to “Record Warming and Melting of Greenland”