I will travel to Spitsbergen in six weeks to board the German research icebreaker Polarstern. She will sail west across the Fram Strait towards northern Greenland where some of the last remaining glaciers exist that still discharge their ice via extensive floating ice-shelves. If all goes well, we will deploy instruments on the bottom of the ocean across a 30 km wide submarine canyon (Norske Ore Trough). The instruments profile ocean velocities from the bottom to the surface of the canyon that connects the deep (warm) ocean to the shallow continental shelf areas which then connect to two large outlet glaciers, Zachariae and 79N Glaciers. These are two of three glacier that terminate the North-East Greenland Ice Stream (NEGIS) which contains about 15 per cent of Greenland’s ice sheet:

The most southern is Storstrommen Glacier, a tidewater glacier with an almost vertical glacial front attached to the bedrock. The next one up north is Zachariae Glacier which lost its extensive ice-shelf during the last 3 years in a dramatic collapse reported on Mari Pelto’s blog. Presumably, there is little floating ice-shelf left that is attached to the lacier. And only 30 km to the north, we have 79N Glacier whose real name is the Danish Nioghalvfjerdsfjorden. It rivals Petermann Gletscher in ice discharge, areal coverage, thickness, and more with one exception: Nioghalvfjerdsfjorden’s ice-shelf appears remarkabe stable, nobody knows why exactly, but it may provide clues on how Greenland’s ice sheet interacts with and responds to forcing by the oceans. I show a recent Landsat image taken from Neven’s Arctic Sea Ice Forum; the floating glacier is on the left (east) of the image with a set of 5-7 out-cropping islands towards the right (west) providing some pinning support for the ~30 km wide front of the glacier:

Landsat image of Nioghalvfjerdsfjorden on Mar.-22, 2014.

Our 2014 study area is actually to the east, just outside the frame of the above image. The reason is lack of ship time, as this year’s deployment is just a small pilot study to better prepare and understand a larger German-led experiment that will take place both on the glacier and its adjacent ocean and land in 2016 and, I hope, beyond. Furthermore, we are scheduled to be there in June, a tad early for all the sea ice to clear out of the area (79N Glacier MODIS summer imagery) which also explains my intense interest in how the ice develops. And a first fairly clear MODIS image came about yesterday morning: 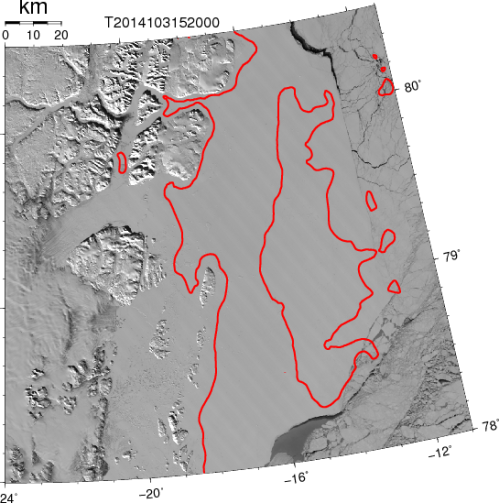 Belgica Bank is about as big as the Georges Bank in the Gulf of Maine. In past decades rafted multi-year ice and tabular icebergs often grounded over shallow Belgica Bank and thus provided an anchor to maintain stability for a year-round land-fast ice cover called the Norske Oer Ice Barrier. This year-round land-fast ice area, however, disintegrated in 2003 and has become an intermittent and not a regular feature for unknown reasons.

Before I can get onto the German icebreaker in Spitsbergen, my 3500 kg of equipment had to be repaired, rebuilt, re-powered, and shipped from British Columbia to Germany via rail, ocean freighter, and truck. It all arrived in 86 pieces only last friday, two weeks behind schedule, because of ice and confused shipping schedules in the Canadian Gulf of St. Lawrence. Lots of great people in Canada, the USA, and Germany made it happen. Wish us luck for the next step in this exciting scientific exploration to reveal one of many of Greenland’s glacier and ocean mysteries.

Bringing acoustic Doppler current profiler mooring aboard ($100,000 on that line).

Corroding acoustic releases to get instruments back.

Working the instrument shop at sea.