I am on my way to northern Greenland and just arrived badly time-lagged in Diez near Frankfurt from Philadelphia. Together with fellow scientists and technicians from Germany, Poland, and Canada, I hope to board Germany’s research icebreaker FS Polarstern early next week in Bremerhaven. Her departure has been delayed by two weeks for engine troubles that needed repairs beyond routine maintenance after she returned from Antarctica last month. She is the most heavily used science ice-breaker and spends more than 300 days at sea every year.

We hope to deploy instruments to measure ocean currents that transport heat to melt Greenland’s glaciers, but more on that elsewhere. This work is facilitated mostly by Germany’s Alfred-Wegener-Institute and limited funds from the U.S. National Science Foundation (NSF). The mooring program on the continental shelf off Greenland near 79 degrees North latitude is a pilot experiment. It is one small part of a range of science missions in biological, chemical, and physical oceanography that will all take place within a more compressed schedule because the loss of almost 10 science days. Stuff happens.

Corroding acoustic releases to get instruments back.

Deck crew of CCGS Henry Larsen led by boatswain Don Barnable (white helmet) recovering a mooring over the side where the zodiak delivered it to the crane. Two scientists in the background waiting for the deck to be secure. [Photo Credit: Canadian Coast Guard Ship Henry Larsen]

For an experiment like this to take place, lots of stuff has to happen “right.” After sketching out a first science idea at a small meeting in rural Maine in May 2013, a formal research proposal and budget was written, submitted, reviewed, and approved with the added challenges of the U.S. government shut-down in October 2013. Then about 7000 pounds of equipment in British Columbia had to be prepared, packed, documented, and shipped via truck, ferry, train across Canada to Montreal to then be sailed via a huge container ship, the “Montreal Express,” to Hamburg and by truck under “custom’s seal” to Bremerhaven, Germany. If this sounds complicated, it was.

Luckily, I had an awesome Canadian broker, Julia Hooper of Internet Freight Services who handled all shipping and custom issues fast and professionally with the logistics and custom’s experts at the Alfred-Wegener-Institute. [Thank ye Nina, Klaus, and Mathias.] 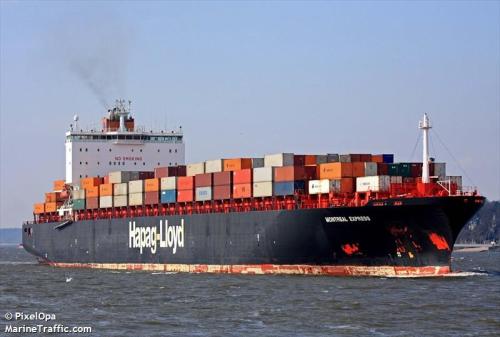 Oh, we also had an exceptionally cold winter along eastern North-America with heavy ice in the Strait Lawrence Waterway in Canada that wrecked havoc to Trans-Atlantic shipping schedules between Canadian and European ports. Our load of equipment was scheduled to arrive March 20 with ample time to meet the April 1 deadline, but it only got to Bremerhaven April 10. Two of our eleven crates arrived broken … and I do not yet know if any critical instrumentation was damaged. This is why I like to get to the ship as early as possible.

Acoustic Doppler current profiler mooring from Nares Strait in 2012 that will be deployed in June 2014 off north-east Greenland.

The author in 2012 with one of Petermann Gletscher’s many ice islands that littered Nares Strait that year. [Photo Credit: Jonathan Poole].

Further potential complications ahead: My mooring technician is now in Resolute, Nunavut pop. 229 as part of another Arctic experiment. He tries to deploy a mooring using a small plane that can land on sea ice. This work depends on good weather, ice, and superior pilot skills. The technician will have to leave saturday to join me in Germany monday, but this is tricky, because the small airport of Resolute has only one departure at 6:30 am six days per week. Bad weather often leads to delayed and canceled flights, I once was stuck in Resolute for a week in August because of excessive snow drifts in 1997. In 2011 the regular small plane crashed and killed all but three of the 15 passengers aboard. They included Marty Bergman, a friend and fellow sailor of Arctic waters.

Reading Arctic travel logs and scientific reports alike, it is all too easy to forget the large number of people and circumstances that make “stuff happen.” For me, it is nerve-wrecking as hundreds of things have to go right, but just one oversight, one wrong shackle, one forgotten anode, one wrong computer command, one missed connection … and all earlier efforts go down the drain. Please wish us luck, I know we can use it.

P.S.: Right now I am staying with my brother near Frankfurt typing these lines from this lovely garden he keeps —

5 responses to “First steps to Greenland”