I love pickled herring, but the fashion of eating this delicacy varies with changing cultures and climates. In northern Europe it used to be a standard fare, perhaps still is, but in my native coastal North-Germany it was poor man’s food eaten for breakfast with fried potatoes (“Bratkartoffeln”). Moving to the USA in the 80ies, I discovered that here it was a Jewish food. I delighted in a small pickled herring shoppe within walking distance of my home in Highland Park, New Jersey, a Jewish enclave where I lived in the 90ies. Moving out of that ethnic neighborhood, sadly, I have not had my daily fill of pickled herrings.

Much herring has traditionally been caught off Iceland: that small country of 350,000 people even fought fisheries wars in which live rounds were fired between Icelandic coastal patrol vessels and the Royal British Navy at a time that 30% of Iceland’s export economy related to fisheries. Anita Elefsen, a historian at the Icelandic Herring Museum in Siglufjordur told an American reporter earlier this year that “Herring is for Iceland what gold was for the United States.” California came into being shortly after gold was found in this original Mexican territory; but let me focus on what I wanted to talk about: Herring, climate, and fashions.

Herring catches off Iceland from 1950 through 2010. [From fisheries.is]

The Icelandic herring fishery collapsed in 1969 as the result of over-fishing and perhaps a changing ocean environment, too. The same thing happened to California’s sardine fishery in the 50ies, and the cod fishery off Newfoundland in the 1990ies. Once a fishery crosses a threshold or tipping point, it collapses. Once it does so, it takes a very long time, often a 30-50 years to recover. The sudden collapse and slow recovery is common in complex systems with multiple, but different stable states. Nature often evolves and changes as it responds to external forcing, stress, change, or any perturbation. Perhaps the following conceptional image shows, how I think of collapsing fisheries, changing ice cover in the Arctic, changing global climates, or the vagarities of what is fashionable in clothing, food, toys, or electronic gadgets: 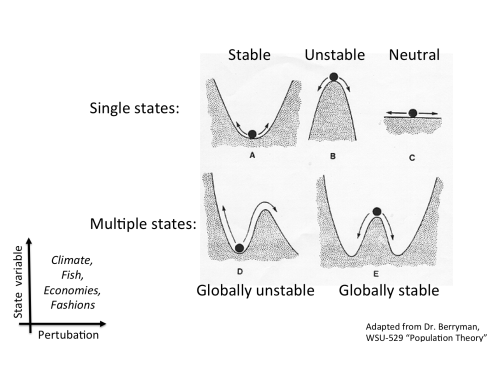 The top panel shows simple systems with a single state only: The ball rolling in the valley will always stay in the valley no matter how much we move it away from this initial location. This is what physicists and biologists refer to a single stable equilibrium. No matter how much we stress this system, it may oscillate wildly, but it will always come back quickly. This situation is contrasted by the other two entries in this row. If our valley becomes a flat surface, pushing the ball will move it along, but it will only go so far, but never come back unless we push it the other way. This is called a neutral equilibrium. Now, a very unstable situation arises at the top of a mountain. Any tiny change or forcing of the ball, and it will fall to never return to its initial position. This is called an unstable equilibrium.

Now these are all useful contexts, but nature usually has more than a single state and the second row tries to visualize this with two possible states. Both entries have stable solutions, think of a valley as a stable state that responds to change without going over the hill. Once over the hill (the threshold or tipping point), one enters another stable state that may be different, that is, the number of herrings present are smaller or the globally averaged temperature is higher, or iPhone usage is larger than it was before. Going over the hill requires a large change to enter another valley. It is very hard to get out of this other valley as it requires another large change that may not happen for a long time. This is how I think about climate, too, or fisheries. We can stress and change it a lot, but once we cross the hill, we are in a new domain, a new world, that is hard to escape from. Herrings took a beating for 10 years (lots of fish), but once crashed, the new equilibrium (few fish) destroyed the livelihood of many families.

Now back to California and my beloved pickled herring: This christmas is the first time that I spent with my oldest son who lives in California. When I was asked what I wanted as a treat for the christmas dinner, my response was, well, guess what: Pickled Herring. They even got a special market in Morro Bay off the Central Coast where it is being sold. Wheeheeeee, can’t wait for the delight of good company that often comes with good fish.