Several pieces of the Manhattan-sized ice island that broke off Petermann Glacier, Greenland in 2010 arrived, dispersed, and melted off Newfoundland last summer. They provided stunning displays visible to the naked eye from the coast. The Canadian Ice Service just distributed this set of radar images showing 4 pieces that are all grounded and/or stuck in ice. None are moving. 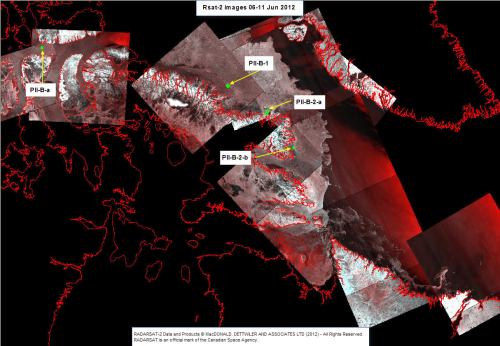 Overview of fragments of Ice Islands that broke off Petermann Glacier, Greenland in 2010 as of June-11, 2012 from RadarSat composites. [Credit: Luc Desjardins, Canadian Ice Service]

This is why oceanographers like myself love these bits of ice islands to bits: they tell us about the ocean below the surface that satellites do not see, but, sadly, all fragments are stuck either to the seafloor in shallow coastal waters or are cemented in place by immobile sea ice that is “land-fast:” Think of it as ice that is glued to land and to each other. This sheet of glued-together ice extends some distance offshore. The distance can be a few yards during a cold winter night in Maine or 100s of miles off Siberia. Offshore islands, rocky outcroppings, or grounded ice islands all anchor land-fast ice by adding local support and thus strength and stability to the immobile land-fast ice.

Too much talk, lets explain this with an image of the largest ice islands, called PII-B1. It is about 4 km wide and 9 km long. I dropped a black dot in its center as it is hard to see where to look in this image. I also show land in grey, open water in blue, and ice in shades of white and yellow:

There is clearly a 30-km wide band of ice attached to the land with a line of blue water separating it from ice that is mobile and has different signatures. A blue band of ocean has emerged, I speculate, as the result of winds from the south that moved the mobile ice to the north-east (to the right in the image). Neither the land-fast nor the grounded ice island PII-B1 embedded in it moved, so open water appears where there was mobile ice before. This is called a shore lead and I bet there are plenty of seals and whales feasting there now. Note also the arched entrance to Home Bay (bottom left) where loose ice is scattered towards the headland of Henry Kater Peninsula.

As summer is arriving fast in the Arctic, the land-fast ice will disappear, breaking up as the sun and air above and the ocean below weakens the ice by melting. This will expose the thicker ice islands and icebergs to wind-forced storms and waves more violently than it does now. And even those ice island grounded to the bottom of the ocean in shallow water will become free during a time of higher than normal sea level, perhaps during a spring tide, perhaps during strong winds from the north. Then these currently stuck-in-the-ice ice islands will continue their journey south towards Newfoundland and the Atlantic Ocean that they began in 2010 when they were born in northern Greenland.

EDIT: For context I append an earlier RadarSat image from October-18, 2010 when all segments were much closer in space. 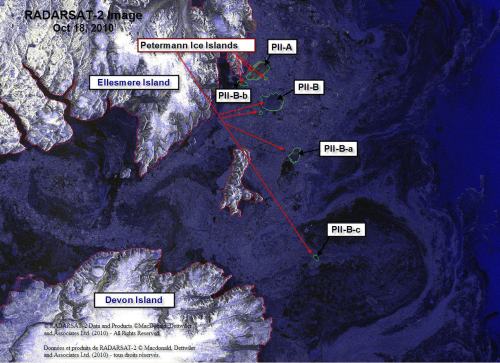