Our minds travel easier than the body. My eyes have never seen East Greenland, but I moved across its white glaciers, turquoise streams, green valleys, and black oceans many times. Reading expedition reports of Peter Freuchen from 1912, I feel north-east Greenland as he climbs with 3 companions and about 50 dogs down an icy cliff from the lifeless desert of the inland ice to the more fertile coastal plains. They are hungry and depend on the sparse vegetation that supports the musk ox, fox, and rabbit that they must hunt to eat.

Grass and caribou antlers on a fertile coastal plain of North Greenland in summer.

Photo credits go to travelers dedicated to reach the northernmost parts of Greenland that they call Arctic Thule.

There is more to my mental voyages than fingers on maps, photos, and worn reports. The physical scientist in me thirsts for observations to answer nagging questions on if and why and how the physical world is the way that we think we see it. For this I probe the air, the ice, and the oceans in ways that are not visible to the naked eye. I dislike traveling on a fixed surface that is defined by where I stand. The darkness of the unknown attracts me. What is below the pink pebble on the beach? What is beyond the horizon? How did stone and ice get here? Where will it all go next? These are the questions that drive me … today to North-East Greenland where two large glaciers flow eastward into a coastal ocean as they have not yet carved a fjord the way that the westward flowing Petermann Glacier has done on the other, western side of Greenland.

My travels started on a train to Boston to meet fellow coastal oceanographers in Biddefort, Maine. On friday an eminent German oceanographer and fellow gardener asked me a simple question on what is ice, what is land, and what is glacier on a fuzzy small paper copy of the area shown both above and below. In the satellite imagery below the black tones represent open water, the bright whites represent ice caps at high altitude, and the grey represents either land or diffuse mobile sea ice. The land comes into sharper focus in the image from 2009 as almost all sea-ice is frozen into one single sheet of ice that does not move, it is called land-fast ice and is distinct from glaciers, but that is harder to see. The two images also show the range of sea ice cover at the height of summer: Sept.-1, 2002 represents minimal and Sept.-1, 2009 represents maximal ice cover. Looking at over 30 years of satellite data from this area, I find lots of variations from year to year, but no trend that stands out from above the natural noise. I digress … maybe. 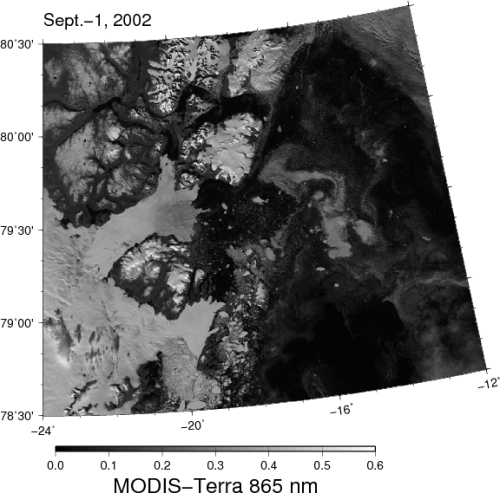 Now why is the ice cover so different from one year to the next? As a physical oceanographer my first two instincts are to get data of the bottom depth of the ocean and to get a feel for what the ocean temperature and salinity in the ocean looks like. These two pieces to a larger puzzle help me to say something about ocean circulation and heating. So, here is what the topography above and below sea level looks like: 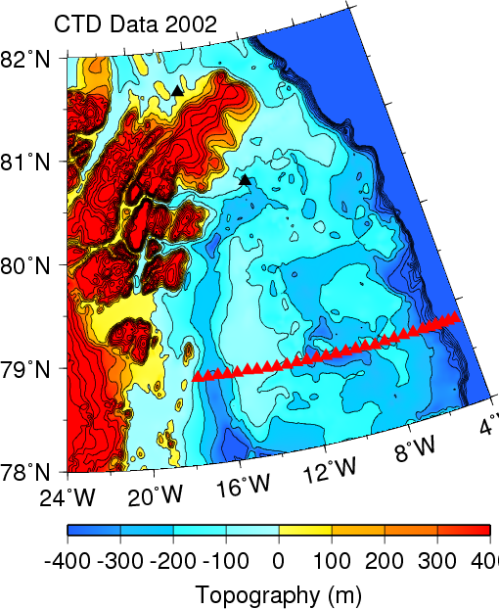 Map of North-East Greenland showing land elevations in red and yellow and bottom depths in blue. Data are from IBCAO-2 and contoured in 100-m intervals. Black triangles indicate locations of weather stations at Station Nord and Henrik Kroeyer Island with records longer than 25 years.

For scale, the map shows an area that would fit Boston near the top in the north and Washington, DC near the bottom in the south. Using the fasted trains in the US of America, it takes almost 7 hours and costs $250 one-way. Notice that there is a deeper trough that circles from the south past both glaciers to the west towards the north-east. This trough feeds the glaciers with warmer waters as it cuts off a shallower bank (my students both called it a sandbar) to the east. We will next have a vertical look at a vertical slice from the deeper waters in the east, to the shoal in the middle, and on to the trough in the west along the line of red triangles. The data along this section were collected by the German research icebreaker PolarStern which visited this part of Greenland in 2002. Along the section it collected profiles of ocean temperature, salinity, and much more:

Section of density (top), temperature (middle), and salinity (bottom) across the shelf off North-East Greenland in the summer of 2002. The view is to the north with Greenland on the left (west) and the deep Fram Strait to the right (east). Symbols indicate station locations. White areas indicate bottom topography.

The warmest waters in the section we find at 300 m depth both offshore in the east and in the deep trough in the west. These warm waters are also dense because they are salty. Based on the known bottom depth, it is not clear how this dense but warm water gets into the fjord where the floating glacier contacts the bed-rock and ocean near 700 m depth some 80 km landward of its terminus. It is possible that the bottom depths have not all been charted in enough detail to connect the warmer deep ocean waters with the glacier. We can safely ignore the warm and fresh waters within about 30-40 meters of the surface as they are merely melted sea-ice heated by 24 hours of sunlight. This layer is of little importance with regard to the adjacent glaciers.

An easy-to-miss, but revealing tidbit of substance in these data are the sloping lines of density: As we move from km-150 to km-200 we find that both salinity and density slope upward from about 150-m depth to 100-m depth. Such slopes often indicate currents, but to “see” this, one needs training in ocean physics on a rotating earth. Nevertheless, the more upward slope we observe, the more southward flow we can infer. The situation is reversed in the trough next to the coast. Here we find a downward slope of density as we move from km-0 to km-40. The inferred (geostrophic) ocean current with this slope is from south to north. It is this current that is postulated to drive the warm waters towards the glacier within this trough. Putting these two currents together, we find a clock-wise circulation around the shallow submarine bank. I will want to be more precise on how strong these currents are and how they vary from year to year and how the strength of these currents perhaps also relates the ice cover, but this cannot all be done tonight.

So let me conclude my virtual voyage of arm-chair discovery with a HUGE thank you to all those scientists and governments that put their data online for ANYONE to use as they see fit. ALL data presented in this post I found on the internet from very reputable sources such as IBCAO (bottom depth), NASA (satellite imagery), Danish Meteorological Institute (weather stations), and the German Alfred-Wegener Institute (ocean temperature and salinity). There is more to discover, ways to travel, and stories to be told. The mind controls the body or so we wish.