When a large outlet glacier of North Greenland (Petermann Gletscher) discharged an ice island four times the size of Manhattan in August of 2010, the United States’ Congress held formal inquiries on its cause within days of the event. Congressmen, scientists, and the global media speculated that this event and concurrent severe droughts in Russia and floods in Asia were tied to record-breaking air temperatures and global warming. Reviewing available data, Johnson et al. (2011) cautioned that most melting of floating ice shelves such as Petermann Gletscher is dominated by physical ocean processes below, not above the ice (Reeh, 2001, Rignot and Steffen, 2008). The National Journal asked me to write an essay to answer the question: “Is Climate Change Causing Wild Weather?” which I answered with a nerdy No, but …. Motivated by questions asked during the congressional hearing, I showed that waters in Petermann Fjord (a) originate from the Arctic Ocean to the north, (b) contain heat of Atlantic origin, and (c) have warmed significantly since 2003 (Muenchow et al., 2011). 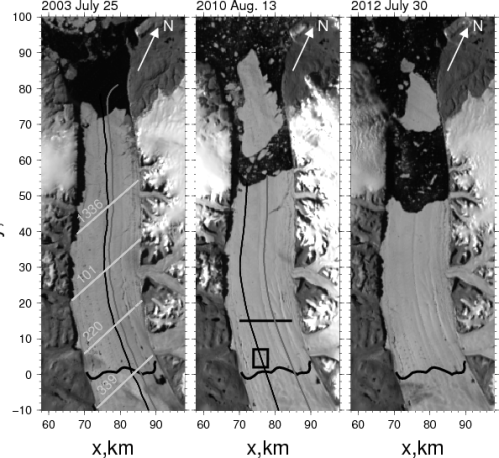 Petermann Gletscher from MODIS Terra. Repeat NASA along-glacier flight tracks are shown in the left and middle panels. White line across the glacier are ICESat tracks. Thick black line across the glacier near y = 0 km is the grounding line location from Rignot and Steffen (2008). Dark areas within 2 km off the western wall are mountain shadows.

When I reported here that the same glacier discharged yet another ice island in July 2012, this one “only” twice the size of Manhattan, I was not so sure anymore, that this was merely another extreme event caused by natural processes. Furthermore, only 4 weeks later I was aboard the CCGS Henry Larsen working in Petermann Fjord and Nares Strait to recover instruments that we had deployed in 2009. Witnessing dramatic change off North Greenland from my first visit in 2003 to my last in 2012, I will send NASA a proposal on monday. If suported, it would enable me to test the idea, that a changing sea ice cover off North Greenland over the last 30 years or so relates to the retreat and decay of glaciers north of 76 N latitude. Most of these glaciers connect the Greenland Ice Sheet to the ocean via floating ice shelves as does Petermann.

This is an image that shows land-fast ice in Nares Strait next to Petermann with the large ice-arch blocking all flow of ice to the south where we see open water or thin ice:

Contrast the conditions in June 2012 above with in April of 2009 below. The southern ice-arch failed to form in 2009, there is much open water and loose, thin ice next to Petermann Fjord, but a northern ice-arch formed and prevented all flow of thick ice from the Arctic Ocean into Nares Strait or Petermann to glue it all together as it did in 2012 (or right now for that matter):

My main question is this: Has the changing sea ice cover next to glaciers anything to do with the break-up of many large glaciers all around North Greenland that we have observed the last few years? Is the removal of the summer sea ice from the many fjords of North Greenland a normal occurrence or is this a new regime that flushes many fjords free of ice in summer? Does the available record of air and ocean observations allow us to explain observed change? I believe that the public has all the data (MODIS, SSM/I, ICESat, etc) to answer these questions, but it will need a little work to actually provide quantifiable answers with error bars to pass academic peer review. Anyone is more than welcome to help and maybe even learn or apply skills for a graduate degree and well-paying jobs in physics or engineering.

ADDENDUM (16:33 EDT): As a result of Greenland losing so much mass and ice, the geographic North Pole started in 2005 to move abruptly towards Greenland. This was reported earlier this week by Nature after the research was accepted for publication at Geophys. Res. Let.