This morning Petermann Glacier lost another ice island of a size comparable to what it lost in 2010:

The break-off point has been visible for at least 8 years in MODIS imagery propagating at speeds of 1 km/year towards Nares Strait. The fracture also extended further across the floating ice sheet from the northern towards its southern side.

This event is still evolving, Trudy Wohleben of the Canadian Ice Service noticed it first (as in 2010) after reviewing MODIS imagery. Several people in several countries are monitoring and assessing the situation, but a first estimate of its size is 120 +/- 5 km^2 or about 2 Manhattans.

The Canadian Coast Guard Ship Henry Larsen is scheduled to travel to Nares Strait (and Petermann Fjord) to recover moorings placed in 2009. These mooring data, if recovered, will contain ocean current, temperature, salinity, and ice thickness data at better than hourly intervals from 2009 through 2012.

UPDATE: For comparison, I here show the 2010 imagery on the same scale using the same processing and colors. There will be more imagery this evening as MODIS-Terra passes over the area closer to nadir (better resolution or sharpness of the images). Furthermore, clouds seem to be disappearing. 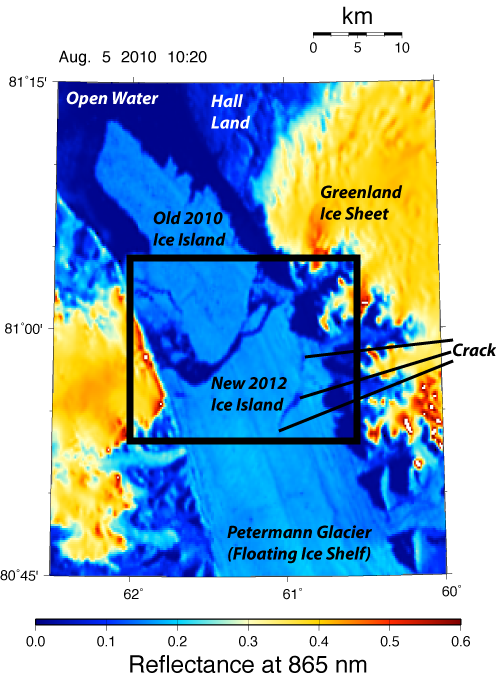 The 2010 Petermann Glacier calving event also indicates the crack that broke off this morning as indicated. Note that the entire floating ice shelf moves by about 1 to 1.3 km per year, slightly less than a mile per year. The crack in 2010 is where the 2012 ice island formed.