Winter has come to north-west Greenland as the sea ice of Nares Strait has locked itself to land and stopped movement of all ice from the Arctic Ocean in the north to Baffin Bay and the Atlantic Ocean in the south. While there is no sunlight for several more months now during the polar night, the warm ocean beneath the ice emits heat through the ice which becomes visible to heat-sensing satellites. The light yellow and reddish colors show thin ice while the darker bluish colors show thicker ice today: 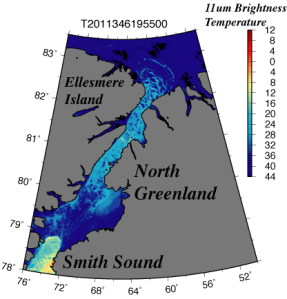 The prior 2010/11 winter was the first in several years that these normal conditions have returned. The ice arch in Smith Sound did not form in 2009/10, 2008/09, and 2007/08 winters while a weak arch in 2007/08 fell apart after only a few days. Conditions in 2009 were spectacular, as only a northern ice arch formed. Since the ocean moves from north to south at a fast and steady clip, it kept Nares Strait pretty clear of ice for most of the winter as no Arctic ice could enter these waters and all locally formed new “first-year ice” is promptly swept downstream:

The very thin and mobile ice in Nares Strait of 2009 exposed the ocean to direct atmospheric forcing for the entire year. I reported substantial warming of ocean bottom temperatures here during this period. This new 2011/12 ice arch formed the last few days. If it consolidates during the next weeks, then it is very likely to stay in place until June or July of 2012. It decouples the ocean from the atmosphere and, perhaps more importantly, prevents the Arctic Ocean from losing more of its oldest, thickest, and hardest sea ice. This is very good news for the Arctic which has lost much ice the last few years.

For more daily thermal MODIS imagery take a peek at http://muenchow.cms.udel.edu/Nares2011/Band31/ for 2011. Replace Nares2011 with Nares2003 or any other year, and an annual sequence appears. Furthermore, my PhD student Patricia Ryan just sent me a complete list of files that I need to process until 2017. Fun times.