A new ice island is about to form as spring and summer arrive in Antarctica. NASA researchers working on Pine Island Glacier (PIG) as part of the IceBridge Mission discovered a 30 km wide rift some 25 km from the ocean during overflights in a DC-8 research aircraft.The rift will eventually will break off into a tabular iceberg about 10 times the size of Manhattan. The rift is wide enough to be visible in optical satellite imagery that has a spatial resolution of 250 meters. A BBC report credits NASA scientist stating that this large calving of an ice island is part of a natural, roughly decadal cycle. 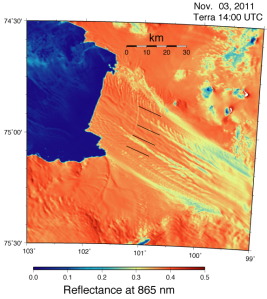 A crack runs across the floating ice shelf of Pine Island Glacier in Antarctica, seen from NASA's DC-8 on Oct. 14, 2011. Credit: Michael Studinger/NASA

Antarctic massive ice sheets contain 70% of all freshwater and 90% of all ice on earth. Most of this is contained within the stable East Antarctic ice sheet where temperatures have increased little. In contrast, the West Antarctic ice sheet has seen warming by about 0.2 degrees Celsius and a net loss of ice to raise global sea level by perhaps 2-3 inches in 100 years. The grounding line Pine Island Glacier (where ocean, bedrock, and ice meet) has retreated for several decades as warmer ocean waters near the bottom cross a sill and plunge into a landward depression of the bedrock. This leads to enhanced melting of the floating ice-sheet and a potential instability that could lead to a collapse of the ice-shelf and much enhanced discharge of the Pine Island Glacier to draw down a large fraction of the West Antarctic Ice Sheet.

A similar physical process, albeit at a smaller scale, is potentially working at Petermann Glacier off Greenland where the grounding line is at a local maximum of bedrock elevation. Petermann’s grounding line has probably not moved substantially the last 100 years or so.

More detail on the evolving Pine Island Glacier, Antarctica event can be found at a NASA media briefing.