Mud, mud, and more muddy mud was hauled from the bottom of the ocean for
the last five days from depths of one, two, and even three miles below the
icy surface. The biologists aboard are having a field day with mud and all
life forms that relate to mud. The mud is on their faces, mud is on their
pants, mud is on sampling dishes, there is mud in the air, mud in the
hair. People on this ship poke, grab, extract, label, profile, and film
mud. There are people filling vials with mud, people sucking water from
the mud, people running mud through fancy coffee filters, people preparing
mud with chemicals for later analyses.

The fascination with mud, mine included, makes me wonder if perhaps there
is something to the many creation stories that we all evolved out of the
mud. Perhaps what is done here and elsewhere is to decoding mud in search
of life and how life works deep down. The clean and un-muddied people are
shallow water physical oceanographers like myself who barely touch water,
never mind mud; but I got a beer cap of mud from 3 miles down sitting on
my computer as I type these lines.

It was not always like this for me: I grew up a few miles behind the dikes
of Germany’s West Coast. No promising sunny California with its rocky
inter-tidal, but endless tidal mud-flats extending to the horizon on a low
tide. We had battles with mud as kids when the tide was out and were
hosed down a few hours later by the incoming tide. Water waist-deep, we
then dove into the ground, head-first to feel the gentle impact of the
soft mud half a foot thick. Fun, children playing with mud. It was fun
because it was both dirty and smelly business.

Strangely, though, the mud that many biologists aboard are excited about
does not smell … but let me double check by asking Ulrike B., if she lets
me smell some of her mud that she just captured with a massive contraption
that she had moored about a mile deep for 36 hours collecting mud in
containers and sampling it with fine glass electrodes to measure microbial
activity. Microbes are tiny critters neither plant nor animal, a little
like the bacteria that give you the sniffles, and they are everywhere
doing lots of funny chemistry in our stomachs, throats, as well as the
bottom of the ocean.

The mud aboard does not smell, not even a tiny bit. Ulrike B., who is from
Belgium and who knows the mud-flats of the North Sea well, just told me:
“I had to smell the mud at first, too, it is none of that stinky mud we
got in the North Sea.” Wondering why, I was told quickly, “… lots of
oxygen …” as she handled 3 samples sorting and preserving them. Ian S., a
British chemical oceanographer without an urgent task at hand explained in
more detail the difference between smelly estuarine and deep sea mud:
“Most of dead matter sinks from the surface to the deep sea where bacteria
help decompose it by uses dissolved oxygen in the water-column. Hence
there usually is enough oxygen in surface sediments for bacteria to deal
with the small amounts of organic matter that arrive.  In shallow waters
more organic matter arrives, at the bottom, bacteria use it up quickly and
then switch to other forms of oxygen that often releases sulphur
compounds, giving shallow sediments a strong smell.

There was also something about receptors that made me think of oxidation
potentials, but I had my answer, I felt. 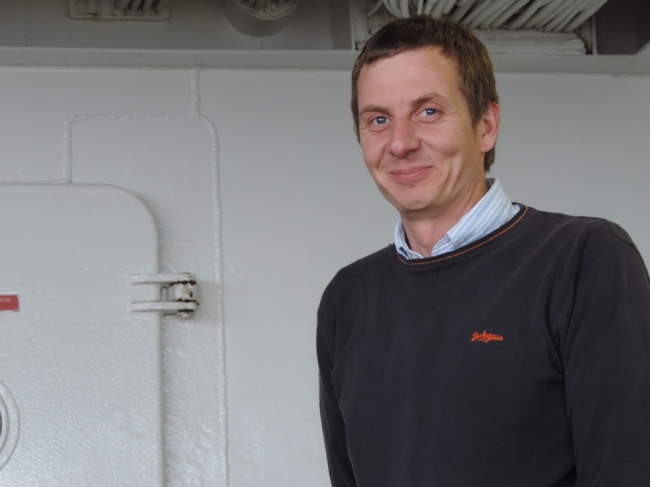 So, in summary, the North Sea mud smells, because there is so much life in
it. And as this life dies, it starts a new cycle that uses up the oxygen
in the mud. The fancy word for life is “organic matter” as it refers to
plants and animals. These plants and animals also fix carbon, the stuff
that we burn in our cars that makes our globe a little warmer each year on
average. When these carbon-based life forms die and sink to bottom of the
ocean, they decay almost the same way on the bottom of the ocean as a
banana peel is rotting away on my compost pile at home.

The process of “rotting” uses up oxygen. There is plenty in the air, but
not always on the ocean floor, except the deep ocean, few rotten bananas
here. Microbes probably help to eat up the dead stuff using oxygen and
making nutrients that then becomes food stuff for living things. Better
have a biologist proof-read this, as this stuff is not my cup of tea.
Physics and mathematics are so much easier to deal with than this fuzzy
thing called life and its many competing and co-operating cycles