The glaciers and ice-sheets of Greenland retreat and melt in a warming world. Towering almost 3000 meters above sea level the ice-sheet is so thick and heavy that it depresses the bedrock underneath below current sea-level. Monitoring the ice-sheet, outlet glaciers, and sea ice of Greenland, NASA’s Operation IceBridge flies aircraft packed with radars, lasers, and optical sensors each spring and summer all over Greenland. There are exciting blogs written by the scientists aboard as they live and work out of Greenland. And today I discovered that they also provide video feeds as their plane conducts measurements. Here is an example from yesterday:

I am not entirely sure on the exact location off south-east Greenland, perhaps this is the area near Helheim Glacier, e.g., 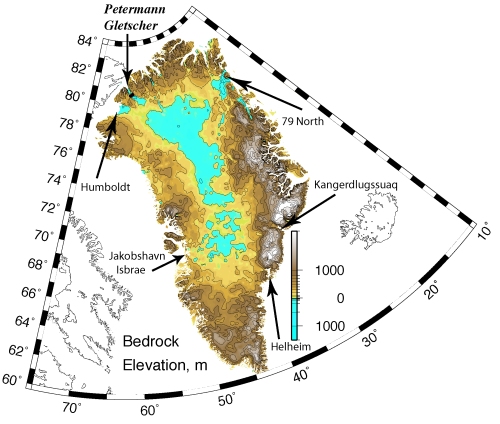 but this will become clear as soon as the data are released to the public. This usually happens within a few months. The wide and open data distribution and access is one of the greatest things about this mission. If you want to see where the plane is now, this is the screenshot I took just now (site) 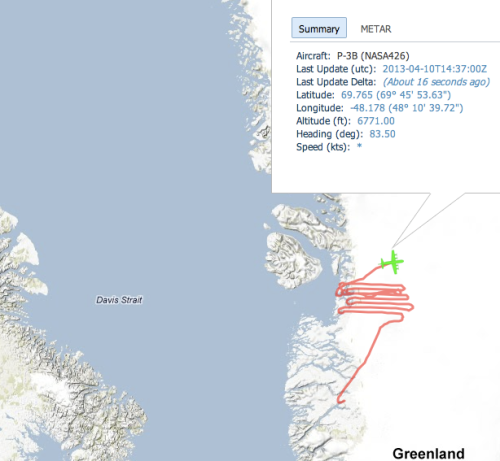 The evolution of Jacobshavn Isbrae retreat from 1851 through present. [From NASA’s Earth Observatory]

Jacobshavn lost its buttressing ice-shelf during the last decade and now rapidly discharges ice from the Greenland ice-sheet directly into the ocean at a rapid rate. Most likely, the ice-shelf was melted by the ocean from below (Holland et al., 2008). This type of accelerated discharge raises global sea-level, because ice previously sitting on Greenland’s bedrock moves into the ocean where it eventually will melt. In response to the ice removed, the bed-rock rises as there is less mass above it to hold it down (Khan et al, 2010). All this has actually been measured by satellites (mass-loss) and ground-based GPS (bed-rock response). We live in a dynamic and rapidly changing world where our sensors and software show new patterns of physics that have never been seen before. There is so much more to discover …

4 responses to “Cockpit’s View of Greenland’s Glaciers, Ice-Sheets, and Sea-Ice”