Ocean waters are rising and flooding inland waters in Delaware and elsewhere. Some of this is perfectly regular and normal such as the up and down of the tides. Some of it is irregular and normal such as caused by storms, river discharges, waves, and weather. And some is caused by global warming as we continue to burn coal and oil to power our economies. Lets have a quick look at what all this looks like and try to put this into some perspective, but Sandy’s 5.3 feet surge last monday was second to the 5.5 feet surge that hit Lewes in 1962. 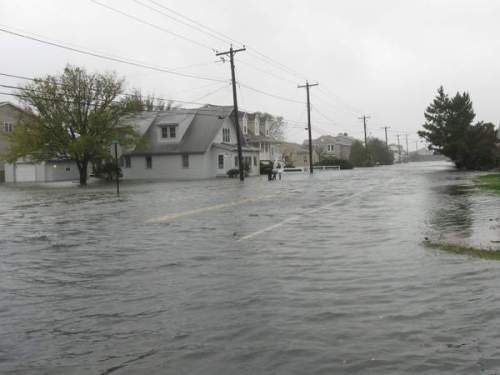 The up and down of the tides each day is about 3 feet in Lewes, Delaware. This large change in sea level is so regular, normal, and predictable, that I remove it from all further discussion, because I want to know how extreme an event this week’s storm Sandy was. For this purpose I downloaded all the hourly tide gauge data from Lewes, Delaware from NOAA. The record starts in 1957 and is ongoing. Here is how the record looks for the last 4 weeks including the surge caused by Sandy last monday: 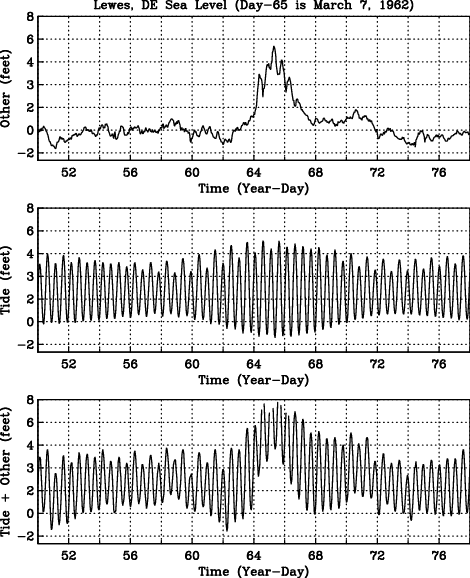 So while Sandy was a very large surge, it was neither unprecedented nor a once in a century event. Furthermore, and this is where I come back to global warming, the 5.3 feet 2012 surge of Sandy includes the last 50 years of steady sea level rise which comes to about an inch every 10-15 years or about half a foot in the ~50 years between 1962 and 2012. So, a repeat of the 1962 storm system would cause a 6.0 feet and not the 5.5 feet surge that took place in 1962.

Furthermore, while the real size of the surge depends on where the center of the storm makes land-fall or where you are relative to the storm, the rising seas caused by global warming are much more uniform, that is, they are little different in Boston, New York, Lewes, Norfolk, or even San Francisco:

So, global warming and the rising seas it causes are both real and here to stay. Global warming provides the upward creeping background sea level to which larger tides, waves, and surges add. The combined effect of all these cause the coastal flooding. So 50 years from now, a rare, but perhaps perfectly natural freak storm like Sandy will cause a storm surge of 5.8 instead 5.3 feet on account of global warming. About 1/3 of this added sea level is caused by the oceans expanding as they warm, another 1/3 is caused by melting glaciers and ice sheets in Greenland and Antarctica, and the last 1/3 is caused by other processes. So, what happens on Greenland or China does not stay there, it impacts present and future sea level in Lewes, DE.