Thule on My Mind: Deep Water Port and Air Force Base

I am an air force brat. My father and my father-in-law enlisted in the German and US Air Forces, respectively. They served during the Cold War when I was born in 1961 a few month after the Berlin Wall went up. My father-in-law was stationed in Thule, Greenland, a northern forward base with radars to detect ballistic missiles, fighter jets to intercept planes, and bombers to retaliate in nuclear war. About 60 years later, the fighter jets, bombers, and communist threat are all gone, but the base is still there, and to me it is the gateway to North Greenland. Both US and Canadian Coast Guard icebreakers call its port to receive or discharge crews and scientists such as myself in 2003, 2006, 2007, 2009, and 2012.

Today about 58,000 people live on Greenland spread over an area three times the size of Texas. On July 9, 1951 about 12,000 men arrived by ships to build the base. The 1953 film “Operation Blue Jay” documents the context, people, scenery, logistics, and construction that made today’s Thule Air Force Base (AFB).

The place should really be called by its native name Pituffik, but in 1953 about 130 Greenlanders living nearby were forcibly moved about 100 km to the north to what is now the town Qaanaaq, population 600. Lots of stories here, but I want to focus on the port of Thule:

Thule AFB with its airport, pier, and ice-covered ocean in the summer. The island is Saunders Island. The ship is most likely the CCGS Henry Larsen in 2007. [Credit: Unknown]

CCGS Henry Larsen in North Star Bay on Aug.-2, 2012 at the pier at Thule. Dundas Mountain is visible as is the Greenland Ice Sheet in the background to the south-east. [Credit: Andreas Muenchow] 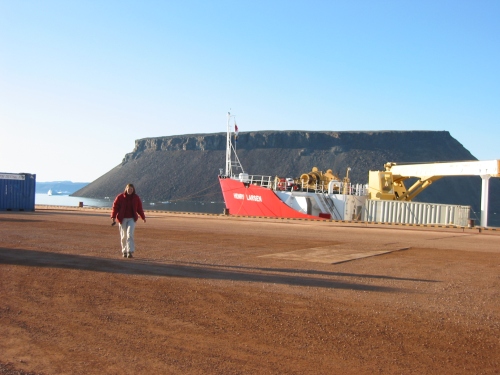 Dr. Helen Johnson in August 2009 on the pier of Thule AFB with CCGS Henry Larsen and Dundas Mountain in the background. [Credit: Andreas Muenchow] 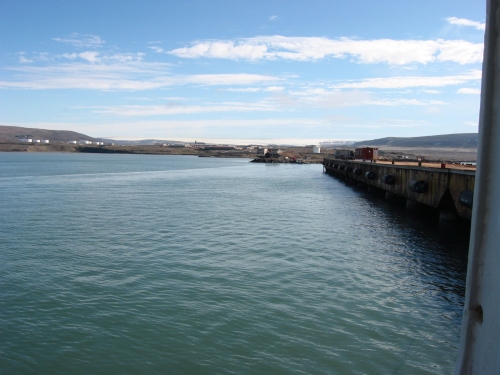 Pier at Thule in Aug.-2012 with the Air Force Base and the Greenland Ice Sheet in the background. [Credit: Andreas Muenchow]

The Port of Thule is the northernmost deep-water port in the world. It was meant as temporary structure in 1951 when it was built within less than 3 weeks around 4 barges each 76 meters long and 15 meters wide. These barges contained self-raising jacks to lift themselves up out of the water. Each barge was then supported with 12 concrete filled cylinders with steel-jackets to protect them from moving ice. In 2006 the so-called DeLong pier was repaired as some of the underwater support columns had developed cracks as the steel used in 1951 did not conform to modern engineering standards. 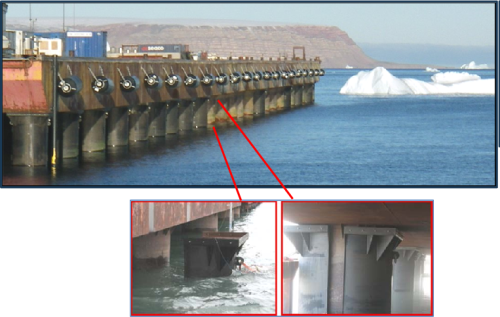 I learnt all of this last week writing yet another proposal. A group of electrical and system engineers, computer scientists and oceanographers submitted a high-risk proposal to the National Science Foundation. Together we plan to build the prototype of an underwater communication network. I think of it as a cell-phone tower system under water. The goal is to get ocean data transmitted under water over long distances for a long time. This has never been done in the Arctic, but we would like to connect such a network to pier of Thule AFB so that our ocean data can be relayed back via satellites and internet connections. That’s the idea and that’s why Thule is on my mind … 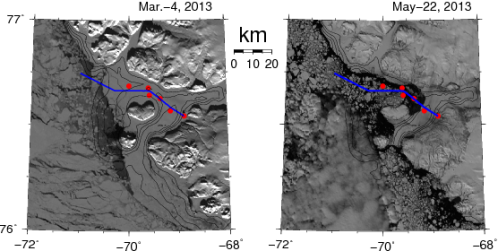 16 responses to “Thule on My Mind: Deep Water Port and Air Force Base”