Posted on September 10, 2012 by Andreas Muenchow | Leave a comment

The Canadian Coast Guard Ship Henry Larsen sailed this summer on a challenging science mission to Nares Strait, Petermann Glacier, and beyond. It reached its farthest North ever at 82 degrees and 15 minutes North latitude. This week I like to focus on the 39 people who make this ship what it really is: a complex community with all the functionality of a city. Captain Wayne Duffett is in overall command. His job will overwhelm lesser minds as he has to manage an airport, a fire department, a power plant, a sanitation department, a hospital, a restaurant, a hotel, a supermarket, a weather station, a port facility, a civil administration, etc., etc. Oh yeah, The CCGS Henry Larsen is also a ship that he moves through ice in uncharted waters to support 8 scientists from 3 countries. All of this is done with only 22 crew and 17 officers who work around the clock on a variety of schedules. 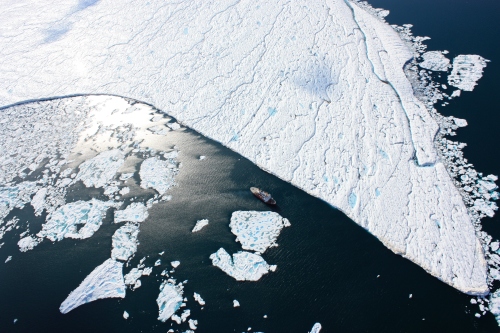 CCGS Henry Larsen next to the Petermann Ice Island PII-2012 on Aug.-10, 2012. The south-western tip of PII-2012 at the bottom right of the image was used by Captain Wayne Duffett as a reference point for the motion of PII-2012. The exact place of this point was monitored at hourly intervals via helicopter while the ship was operating inside the fjord landward of the ice island. [Photo Credit: Canadian Coast Guard Ship Henry Larsen/Jo Poole]

Canadian Coast Guard Ship Henry Larsen at the entrance to Petermann Fjord on Aug.-10, 2012. The ice island PII-2012 is in the background with puddles on sea ice in the foreground. Polaris Bay, Greenland is in the far back. [Photo Credit: CCGS Henry Larsen and Jo Poole.]

The ship may occupy an area of only 2,000 m^2 (100 meters long and 20 meters wide), but it functions as a self-contained universe at sea. Perhaps the most important and largest department with 13 people is the power plant that produces energy to move the ship and to provide electricity and heat to make all other departments’ work possible. The 13 members are quiet and thoughtful men often working in the background in cramped, hot, and dirty spaces below decks. It is very hard to get good pictures of them, but here are two, one of Chief Engineer William Derraugh and Second Electrical Officer Anatoly Eltsov: 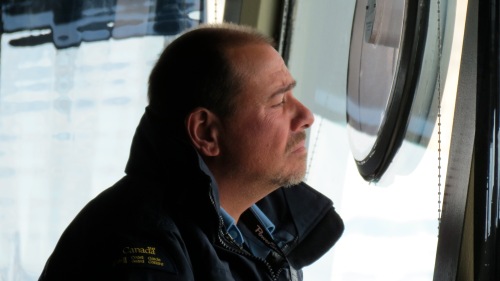 The second-largest department is the fire department that also run the port facilities, the fishing fleet, and provide general support on deck, on the bridge, on the water, and on land to a range of activities. There are nine men in this department that are led by the boatswain or bosun Don Barnable with Chief Officer Brian Legge in command. The men of this department are perhaps the most vocal and visible on the ship as they work so many jobs wearing many hats, uniforms, and arms. I can and will fill entire picture galleries of their work, here are just three images that barely serve as teasers, perhaps:

Deck crew of CCGS Henry Larsen led by boatswain Don Barnable (white helmet) recovering a mooring over the side where the zodiac delivered it to the crane. Two scientists in the background waiting for the deck to be secure. [Photo Credit: Canadian Coast Guard Ship Henry Larsen]

I will have to stop here for now, and will report tomorrow and thursday about the logistics, communication, aviation, hospital, and civil administration departments. There is just too much going on aboard a ship that acts like a complex, advanced, and very mobile city. And with mobile I do not just mean a structure of steel, but a structure made of sailors, navigators, scientists, and engineers.