Soaring towards heaven awash in light, Gothic Cathedrals awed medieval kings, jesters, and peasants alike. Their upward pointing arches allowed walls of stained windows to filter light into these massive buildings when most dwellings from royal castle to decrepit hut were dark, damp, and filthy. While the power of god was both invoked and abused, it was physics and engineering that allowed these cathedrals to scrape the skies. A delicate balance of forces is of the essence to avoid accelerations and collapse.

Arched windows within an arch inside the Cathedral of Reims, France.

Hence it should not surprise that ice arches buttressed by land show similar elegance and stability, but also dramatic collapse. When these ice arches form and collapse is one factor to determine when the Arctic Ocean will be free of ice in summer. 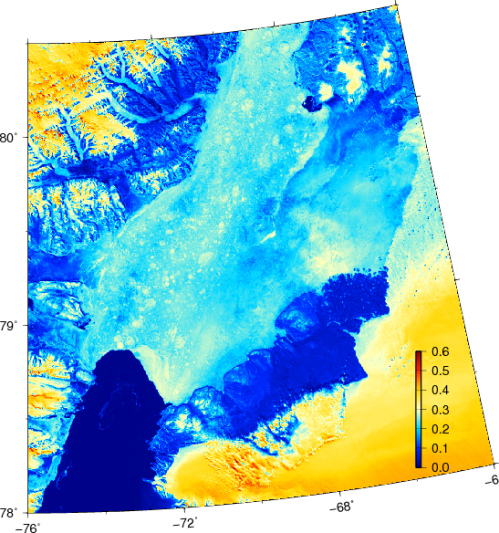 The Nares Strait ice arch forms between December and April most winters. Unlike the medieval cathedrals it consists of blocks of ice. Once in place, the arch shuts down all ice movement. The ocean water under the ice moves undisturbed southward sweeping newly formed ice away. This creates the North-Water polynya, first reported by William Baffin in his ship logs in 1616. The North Water supports wild life for millenia providing food and trading items for people. Even viking remnants from the time the first Gothic Cathedrals were built in Europe were found here: sections of chain mail, iron point blades, cloth, and boat rivets.

I want the ice arch in Nares Strait to collapse as soon as possible so that a Canadian ice breaker can get us to where we like to recover instruments and data that we deployed in 2009. And while I researched the stability of ice arches and studied Moira Dunbar’s 1969 satellite imagery, I came across a wonderful NOVA broadcast on medieval skyscrapers of glass and stone.” PBS stations will show it on Sept.-9, 2012.

Digging a little deeper, I also found a series of Open University podcasts and videos. My favorite 3-minute segment covers lines of thrust where barely connected irregular blocks of wood form a surprisingly stable yet wobbly arching bridge. If you want to build your own arch, then play interactively for fun with the physics of stone arches.

Since I want to understand and predict when the ice arch of Nares Strait collapses, I must understand how medieval architects and engineers designed their Gothic Cathedrals. I will also need understand why some cathedrals are still standing while others collapsed. My icy building blocks in Nares Strait are not as solid as the stones of Reims Cathedral, but unlike the medieval scientists, today we have computers and mathematics to help … as well as more than 800 more years of experience in science and engineering.